Maintaining a consistent temperature is required to ensure the stability and life DC battery banks.

The DC Module (DCM) houses two DC battery banks c/w battery chargers and battery selectors. The DCM is comprised of one single module with two (2) HVAC systems each capable of adequately ventilating the module when battery charging is producing hydrogen off-gassing all while maintaining adequate temperature inside the module.

The DCM has been designed to be an energy efficient controlled environment to maintain the required space temperature. The entire DCM HVAC system had been designed for 2N capacity, with two fully functional HVAC systems that alternate in operation. Both HVAC units include the following major components:

The HVAC system maintains the DCM at an allowable pre-defined temperature range (adjustable) through use of the economizer, DX cooling system and electric heating system. The module O/A damper will maintain at least minimum position to ensure that adequate outdoor air is ventilating the module to comply with OSHA regulations. This minimum setting is determined theoretically and confirmed during airflow testing that takes place during module start-up and commissioning. The finalized minimum damper opening is then programmed into the PLC controller.
The DX cooling system and electric heating system in each AHU will activate and operate as necessary to maintain DCM room temperature within the acceptable range. The exhaust fan will modulate to maintain RM Pressure Set point (0.08”). Supply fans operate at a set constant speed. This speed is set at time of commissioning for proper airflow rate.

Each AHU is equipped with a 3-ton nominal DX cooling system capable of covering the entire cooling load requirement of the DCM space. The DX refrigeration cooling system has internal controls and safeties that enable it to operate which are beyond the scope of this document. The operating sequence of the DX cooling system is as follows:

If hydrogen gas levels measured by the H2 monitor in the DCM are above 2%, both AHUs activate. Regardless of room temperature, whenever the H2 gas concentration, detected by the H2 gas monitor by closing its 2% contact signal, is greater than 2% the OA damper opens at 100% and the exhaust fan is forced at full speed until the signal is cleared. The AHU heating and cooling systems will attempt to maintain space temperature, although in some outdoor air temperature conditions the room temperature in the DCM will increase or decrease beyond the normal operating range. Emergency ventilation requires manual reset at the units local control panel start/stop switch or by recycling power to both AHUs. Supply fans in both AHUs operate at the same pre-set speed as during all the time. Both exhaust fans continue to modulate via VFD speed control to maintain RM Pressure Set point (0.08”).

The Power Room Module (PRM) provides the enclosure required for the electrical infrastructure comprised of: switchgear, ATS, UPS, batteries, and transformers. The PRM is scalable and can be provided as an integrated section of the FGM DC or as a stand-alone remote enclosure serving the SRM(s) or brick and mortar facility. Integrating vendor agnostic gear provides the end user with the flexibility to select their preferred equipment manufacturers. Cabling is provided in rigid EMT conduit, metal clad, or SO cable with cable tray. The PRM casing and CRACs follows the same construction methods as the SRM. Exhaust systems are positioned at heat producing gear for immediate localized heat rejection from the common plenum. Batteries are strategically located to maintain an optimal constant temperature that ensures no degradation occurs to the batteries due to temperature fluctuations. 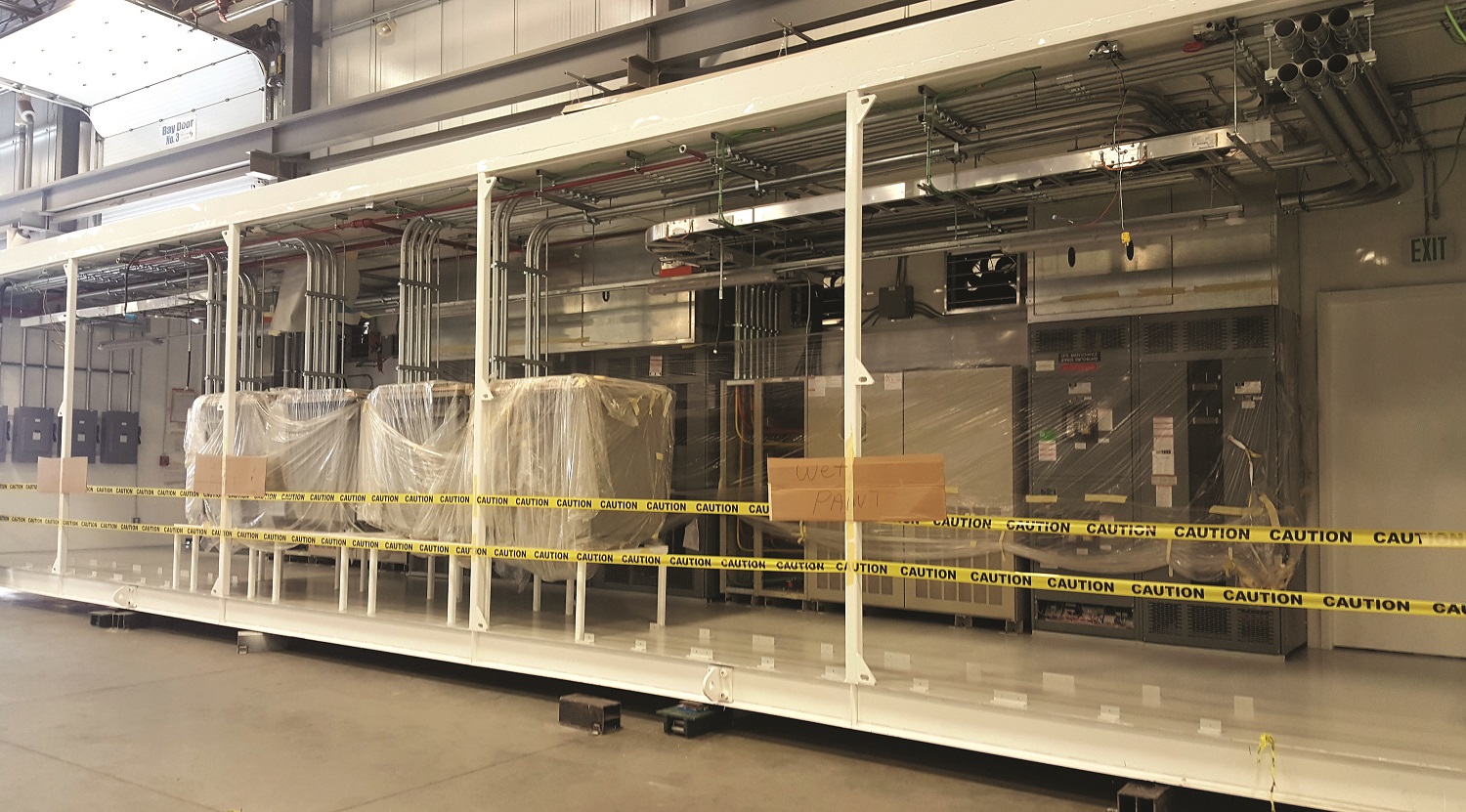